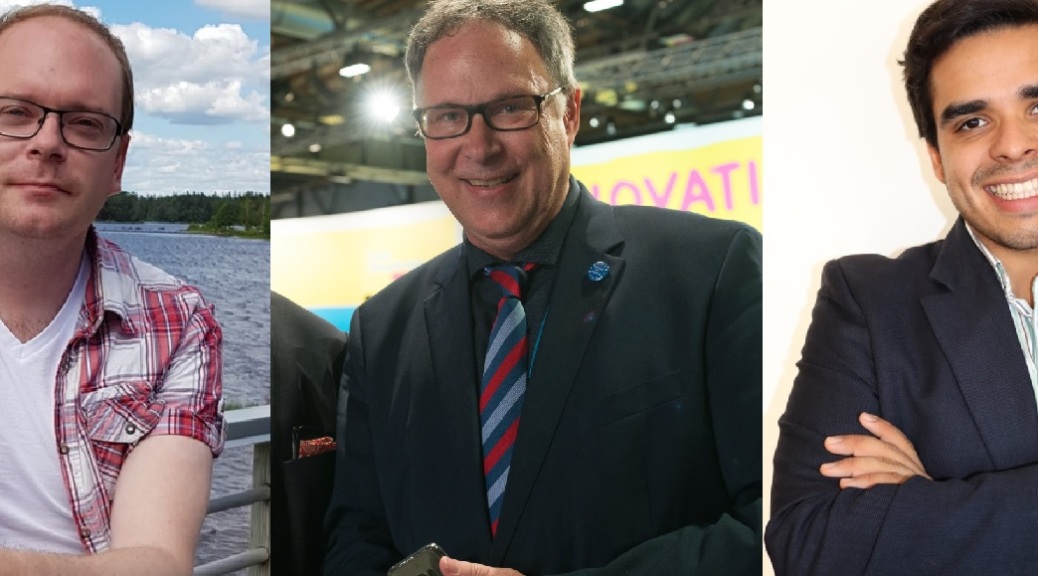 From July 3rd we’ll have congress and council delegate elections: as usual, we gave  candidates the chance to present themselves. Here we are first slot with Wolf Achim Wiegand (Congress and council), Matthias Strand (Council) and Matheus De Paula Costa (Congress)

Why you are running as a candidate?

Wolf Achim Wiegand: I have three mains reasons to run as a candidate. First: I am a fierce fighter for liberalism in Europe – and I want to continue my fight. The ALDE Party Individual Members are the right place to do so. Because I see us as the embryo of a coming trans-European liberal party. Second: The ALDE Party Council and the Congress are the only bodies where we as Individual Members can place our ideas. If we want to be heard our delegates have to act in a responsible but resolute manner. I have been an IM delegate twice and I have the experience to steer our delegation through stormy Congress waters. Third:  My background is: firstly, my profession as a journalist (see http://www.european.expert) which enables me to speak clearly and frankly. Secondly, I am commited as a liberal parliamentarian in Hamburg, a cosmopolitan German port city for maritime industry and trade. The combination of both backgrounds make sure that I can sensibly address issues and find solutions.

Mattias Strand: I chose to run as a candidate as I saw the need for a more political activism on LGBTQ issues. Europe is a great place to be open and free. But there are areas that remain questionable. One example is that laws in some countries still demand sterilization of the person that wants to go through a sex change operation. In the countries that now are being run buy conservative right-wing parties the LGBTQ communities are becoming more restricted, since the views on homosexuality from these parties are generally more biased in this issues. As a result of this, these governments tend to turn the other way when hate crimes are committed against the LGBTQ community. 72 of the UN member countries have laws against homosexuality. The sentence spans from fines to the death penalty. One of the countries that in latter times has implemented laws against homosexuality is Brunei; their constitutional laws have accepted the sharia law to stone homosexual persons and adulterers. In Russia, the LGBTQ advocate organizations are banned from publicly “propagating homosexuality”.     I could write an essay on this matter, and as there are more and more people around the world that have to suffer for their sexuality; that essay would never end. That’s why I am running for legate of both congress and council. My motto is: “A voice for everyone’s equal value. A voice for those who have been silenced.”

Matheus De Paula Costa: Europe still has an organization based in national perceptions. What I admire the most about the Individual Members is this perception of Europe beyond the national. For me would be an honor to gain the trust and represent people who thinks like me in Athens.

Name one initiative or proposal you would like to see endorsed by the ALDE Congress?

Wolf Achim Wiegand: My dream would be to see the ALDE Party Congress to decide that we Individual Members officially become the European liberals’ political arm for contesting future European elections. This would mean a big step towards a more united and renewed Europe. Let us as liberals start to seek and to live progressive responses to isolationism, nationalism, and ignorance!

Mattias Strand: That the ALDE takes a deeper responsibility for the LGBTQ issues in Europe by implementing sanctions against countries that oppose the fundamental right to be free, open and safe from harm. This should also include all minorities within the EU.

Matheus De Paula Costa: I am the leader of the youth section (at my national party) and I am also focused on Human Rights and Environment. So, I would be very interested to see endorsements related to the future of the youth and respect for all. The EU has several interesting initiatives in practice ranging these fields, but I think we could do better. Related to Human Rights, for example, since the accession of Portugal to the EU we transformed from a conservative country to the ones which are more LGBTI-friendly in Europe. However, gay marriage, adoption, trans rights and protection of intersex people still isn’t a reality in several European countries. Also, I am a descendant of Europeans that migrated to Brazil, and my parents decided to come to Europe. I had this privilege to born and grow in a such diverse family and have more than one citizenship, contact more than one religion and ethnicity. But I know that there are a lot of people in Europe which are not being respected due to the place where they born or based in their ethnicity or religion. We need to change this. This is not our Europe, neither it is related to our Liberal values.

What role can individual members have to renew Europe?

Wolf Achim Wiegand: I want to ensure that the people of Europe carry Europe in their hearts. To achieve that, we Individual Members have to develop fresh proposals absent of traditional national party lines. Fulfilling this, we Individual Members could be the the pan-European avant-garde movement leading towards a continent of strength in peace.

Mattias Strand: As Liberals and Democrats are the fundamental guardians of a freedom, openness and democratic values, individual members have a great responsibility to act against all that defies these values. The role should be to increase and evolve the democratic possibilities of all individual members of our union: to adapt democracy to and for the future. Since individual members have access to all countries of Europe, the possibility to change becomes a lot easier. By a click on a mouse you can reach the whole world within seconds. This is what the future is all about: open and free conversations on matters that give results. As individuals we can change the world to be more liberal, democratic, open, and free. Every step will make a change and every step should be encouraged and not limited by regulations and principals. It´s a tough job but it’s a job that will gain our children the chance to be who ever they want to be, to love the person they themselves decide, without living in fear.

Matheus De Paula Costa:  We must persist. We must not fear. The extremists, either from the left or from the right, they do not stop a second to promote their hate speech (base on people’s differences or people’s positions on society). On social media, schools, workplace, streets and no matter where, they will spread lies about MNCs, technology or entrepreneurs, migrants or LGBTIs. We must do the same but defending our values of inclusion and tolerance. And we also need to be more involved, not waiting for others to do things for us, trying to make the difference everywhere.  We need to comeback to fight like a Liberal.